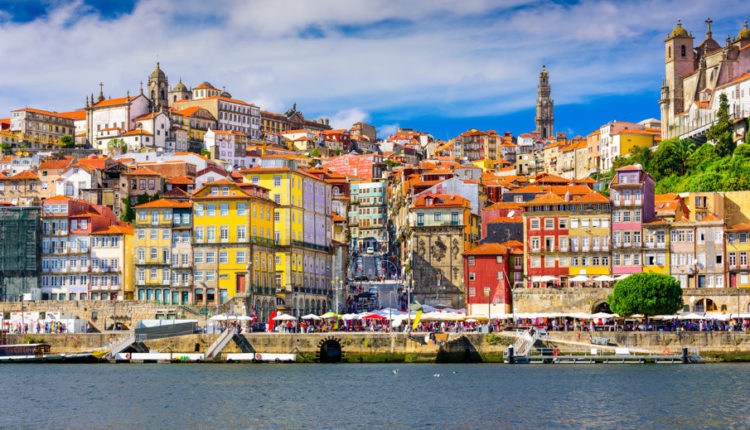 10 Most Beautiful Towns in Portugal

Portugal has got so many beautiful cities and towns. Of course the most famous cities for tourism are Lisbon and Porto, but also lesser-known beautiful towns like Sintra or Evora. We have put the 10 most beautiful towns in Portugal for you here!

Lisbon is a city where your blood flows a bit faster than ever. This is called a seven hills city, located on the Tagus River, flowing over the cozy neighbourhoods, romantic alleys, restaurants, cute trams (such as the famous Tram 28) and beautiful squares.

Because of its location on seven hills and elevation changes of up to 30 meters, there are many vintage points in the city. The central district Bairro Alto guarantees a beautiful view over the city, where incidentally you can find many original and small boutiques.

In the Castelo de São Jorge castle, which is located on the same hill, you can enjoy beautiful views over the colorful rooftops of the city. Shopaholics can indulge in the districts located on the Tagus Baixa and Chiado.

Here you will find familiar and unfamiliar (designer) shops and you can take a break at Bica (Portuguese espresso coffee) on one of the ornate squares.
Moreover, you can enjoy the traditional fado, which is still sung in the intimate Portuguese restaurants. Remember before you leave the city to visit the district from which the Portuguese started their voyages of discovery: Belèm!

In this former fishing village you will find many museums and monuments from the Golden Age of the country. Here in lunch you must taste some Pasties de Belém(A Dish), a world-famous sweet cream bun from this village located next to Lisbon.

In this city you can see waving of laundry in the narrow steep streets, which are formed by the colorful densely packed houses, the cultural atmosphere in Porto.
This port city in the northwest of Portugal, located on the banks of the Douro, makes your heart beat faster again. And not only that: when you think of Porto, you might think a firm sip port.
Yes that’s exactly right, because Porto is where the only real port wine comes from. In the port district of Vila Nova de Gaia, you can see sails at one of the chic cafes, from the port towards the rest of the world.

But port wine is not the only thing Porto is famous for: you will find dozens of bridges and wells in the city, especially in the historic Ribeira district.

The houses are decorated with colours in the district, which is being mentioned on the UNESCO World Heritage Site as well.

In many times back, the locals got their water from the pumps erected in streets that you still can find here. The city is built on hills so there are lots of steep roads and alleys.

The historic Porto offers something for everyone: you do shopping in Rua da Santa Catarina, port wine tasting is on the other side of the Dom Luis bridge and culture sniffing is done in Santo Ildefonso.

In this last area you will find church Santo Ildefonse. According to many tourists, there is the oldest bookstore of Portugal named Livraria Lello. This is the most beautiful bookshop in the world. And this can be found in the district of Sao Nicolau in Porto!

During the Middle Ages Coimbra city was located between Lisbon and Porto since for a century it’s been the capital of Portugal. The classic and rich Coimbra is thus full of impressive cathedrals, like Velha and Se Se Nova and monasteries such as Santa Cruz.

This monastery was commissioned by the first king of Portugal, Afonso Henriques, built in the 12th century. The architecture of the city is a specific combination of typical southern European white walls and pillars with red roofs and medieval facades with detailed edges and large doors.

The University of Coimbra is a good example of the architecture looks like Harry Potter, but the color of the building makes you remember that you are in the south of the continent.
The university also has a special feature: it is the oldest university in whole Europe! Coimbra also has beautiful vast squares like Praça do Comércio. This is the main square of the city, the São Bartolomeu church, in this city most important events has been celebrated for many years.

Braga is the most sacred city in the country, it is located in north of Portugal in the Costa Verde. According to the Portuguese Braga is the city where prayers came true. You can find in Braga many cathedrals that are still actively used, such as the Sé de Braga.

The cathedrals are there since the 12th century and inspired many other cathedrals in Portugal. Braga has been inhabited since prehistoric times. During the occupation by Spain Braga was the heart of Galicia.

As you walk through the streets, on the sloping roads, you’ll still many details to the isolated past. You will find typical houses from medieval and classical squares with statues.

In Southeast of the city there are three shrines: Bom Jesus, Sameiro and Falperra. These three shrines are very important and respectable for the Portuguese. Visit to the pilgrimage site of Bom Jesus do Monte is a must. The magnificent staircase to the church is climbed by pilgrims on their knees.

In train from Faro airport you will find the large fishing town of Portimão in less than 1 hour. Portimão has the largest sardine fleet of Portugal. This means that you can enjoy fresh fish in Portimão.

In the center you’ll only find typical Portuguese fish restaurants. The houses in Portimão are colorful and small. Mostly you will find squares, statues and fountains in the town; this is so center of Portimão looks very authentic.

The Portimão Marina on the other hand is very luxurious. From walkway towards the harbor, you can see big shiny yachts. Portimão played an important role in the Golden Age of Portugal. Here, sugar and coffee was saved and stored by Brazil and unfortunately, slaves also have been traded from the African colonies.

Lagos is a city in the southern province of Algarve. The town is made of stones from Portimão and it is 30 kilometers from the most south-westerly point of Europe (Sagres).
Lagos is situated on the Atlantic Ocean, north of the city is the mountain range of Monchique. The combination of clean air from the Atlantic Ocean and the mountainous area, winds and clouds, ensures that Lagos is one of the sunniest cities in Europe.

Warm summer breezes and tropical atmosphere characterizes this city. Lagos is surrounded by seven sandy beaches. These beaches are surrounded by huge golden rocks.
One of the most famous rock formations of Portugal can be found here: the Ponta da Piedade.
Sometimes you can enjoy playful dolphins jumping out of the water around the rock formations!
Lagos itself pull you in the picturesque marina and the squares are marvelous that are surrounded by restaurants, cafes and small shops.
There are very High hotel apartments in Lagos that are decorated with beautiful mosaics, palm trees and flower bushes.

Funchal is the capital of the Portuguese island of Madeira. The city has great contrasts: Funchal is a micture of old and new. Funchal is in fact a proper metropolis, where you can stroll through the narrow streets of Sao Pedro, shopping in the neighborhood and bubbling in Santa Maria.

Funchal, however, had an important function in the Golden Age of Portugal. This way you can find colonial buildings scattered around the city center, such as the 17th century Fort Santiago.
In the old Santa Maria you can find ancient churches and chapels, including the Corpo Santo Chapel.
This chapel is located between flowering African tulip trees. Funchal is a good start – or just a nice end – your tour over the tropical and wild Madeira. Sintra is the city where the Portuguese kings had their summer residence between the 13th and 19th centuries. This town is located 30 kilometers northwest of Lisbon and received a deserved place on the UNESCO World Heritage List.
Sintra is a splendour town of Portugal. The immense palaces are covered by tropical gardens and rich-looking outdoor places.
The royal palace is in the heart of the city, Palacio Nacional and is the biggest Palace of Sintra. It dates from the 14th century, has two milk bottle-shaped chimneys and a beautiful ceiling which are painted in dozens of colorful birds.

The castle like Palácio da Pena, just outside the center of Sintra, is a happy and crazy building with a yellow tower, typical medieval details and gray trees that provide a knight-like atmosphere.
Besides these palaces you will find that Sintra also has beautiful monasteries such as Convento dos Capuchos.

As Sintra lies on a hill, you can see many places and gorgeous towers over the area and all around Sintra. If you cannot see palaces and castles, but still want to stay in Sintra, you can choose to go shopping in the center or have a picnic in the Parque dos Castanheiros. In the west of Portugal, south of Porto, on the inland lake Ria de Aveiro, Aveiro lies. Aveiro is sometimes called the “Venice of Portugal”.
Along the main channel of Aveiro there are a number of buildings built in Art Nouveau style. There is also a special Art Nouveau route that you can follow.

A shopping center in Aveiro for instance is designed by Dutch architects. Fortunately, this feeling will change soon, because the warm winds coming from the Atlantic Ocean, brings you back to southern European atmosphere.
Besides moving through gondolas Aveiro is also known for its Bugas. Bugas are bicycles that are provided free of charge by the municipality.
If you have more sense in historical pictures and contemporary Portuguese architecture, then you must take these Bugas and cycles towards Convento de Jesus and church Misericórdia.

Evora, a city in the southeast of Portugal, in the Alentejo province, has been given a deserved place on the UNESCO World Heritage List. The city has a wild past where in the 5th century the Romans were the boss.
They ruled from the 6th century, the Visigoths of the city and till the 8th century, the Moors were in power.
Romans, Visigoths and the Moors left many beautiful things. Some examples are the 18 kilometer long Roman aqueduct, the Roman Temple of Évora, the Arab houses with typical mosaics, Moorish blue roofs and a number of mosques.

In the 12th century Évora was recaptured by the Portuguese. Immediately they built walls around the city and built magnificent monasteries like Convento dos Lóios, and cathedrals such as the San Francisco Church.

Read Also: 35 Most Beautiful Travel Destinations in The World

5 Mistakes You Do While Planning Your Family Holidays

Fun Things to Do While You’re Camping in Canada