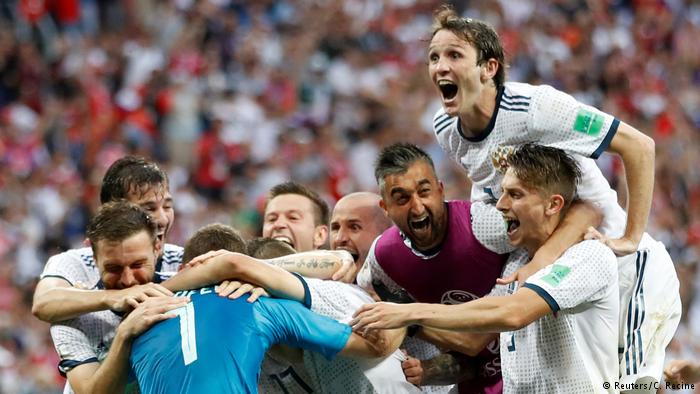 Another Top Team Home: Russia Surprisingly Wins from Spain. Russia has reached the quarterfinals of the World Cup after winning Spain. Russia defeated the world champion of 2010 after the extension and penalties.

The home team, who survived the group stage somewhat surprisingly, eliminated Spain in Moscow with a defensive tactic.

After 1-1 in the regular playing time, there were no goals in the extension after which the host country struck the penalties. Thanks to goalkeeper Igor Akinfejev who turned both Koke and Iago Aspas: 4-3.

Team Björn Kuipers led the game in the right direction. The Dutch arbitration corps rightly awarded Russia a penalty kick just before halftime. Artem Dzjoeba brought the equaliser to his name. Sergei Ignashevich’s own goal put Russia in a deficit.

Russia will play in Sochi in the quarterfinals on July 7 against the winner of the game between Croatia and Denmark.

From the beginning the Russian intentions were clear: with ten men behind the ball, Spain was taken care of in the counter. The home team, however, soon had to adjust the defensive tactics somewhat. Ignasjevich had a free kick only for opponent Sergio Ramos. In the hand-to-hand fight, the Russian got the ball unfortunate on his heel: 0-1.

The pace then went down to Spain. Thanks to Gerard Piqué, who blocked a Russian header with a high raised arm, the host country was allowed to take a penalty. Yugoslavia hit 1-1.

After the break, the Spanish game remained slow and predictable. With Iniesta after more than an hour for David Silva, Hierro tried to give his team more creativity and running power. However, great chances remained. Also in the extension, Spain could not make the difference, after which Akinfejev turned out to be a Russian hero in the penalties series.

Spain won this tournament but one game, against Iran (1-0). Against Portugal (3-3) and Morocco (2-2) was tied. It is already the disappointing third tournament for Spain.

The second eighth final, later today in Nizhny Novgorod, is played between Croatia and Denmark. Two quarter-finalists are now known: France and Uruguay.